4 Facts about being Color Blind 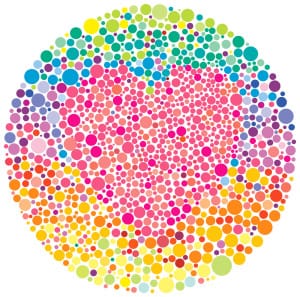 Bill Clinton and Matt Lauer are both color blind! And let’s not forget about Paul Newman and Mark Twain. It’s the reason why Mark Zuckerberg used blue as the predominant color of Facebook. What’s the common denominator? All five of these individuals have suffered from color blindness.

People sometimes joke about being color blind, but for those who have the actual condition it’s no laughing matter. Here are some surprising facts about color blindness or color vision problem, as it’s sometimes called.

Color Blindness Does Not Mean Absence of Color

Some people assume that individuals who are color blind literally see everything as black or white. While that is one form of color blindness known as monochromacy, this variety is extremely rare. Most forms involve difficulty distinguishing between particular colors, such as red and green. An eye exam can determine which form a person has.

It’s a common misconception that color blindness affects only men. This is most likely due to the fact that less than one percent of women are color blind compared to approximately eight percent of men.

Color Blindness is Not Always Hereditary

Most cases of color blindness begin at birth due to genetics. However, it is possible to develop a color vision problem later in life. Causes include aging and injury along with diseases such as glaucoma and macular degeneration.

At present there is no cure for hereditary color blindness. Special lenses are available that can help with color perception, but most individuals are able to develop coping mechanisms allowing them to perform everyday functions with little difficulty.

Early detection is important for successful treatment of color blindness. A relatively simple eye exam is used to screen for the condition. Talk to your optometrist regarding any questions you may have regarding you or your children.